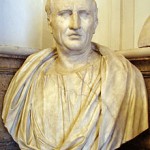 Marble bust of Cicero in the Capitoline Museums, Rome

by Ricardo A. Alvarez

More than 2000 years ago Cicero (106 – 43 BC) the Roman philosopher, lawyer, political scientists, consul, and one of the most brilliant orators that ever lived said “The countenance is the portrait of the soul, and the eyes mark its intentions”.

This phrase from such a great mind is representative of the importance humankind has always attached to expressions of the face, and in particular to the eyes, as reflecting the character, the intentions, in fact the very soul of a person. It has been because of such importance that artists have strived to portray the human eye with as much detail and expression as possible, whether in stone, marble or bronze or through paintings, and other media.

In this long quest for depicting life-like human eyes many have tried, but only a few have succeeded. In my opinion, I would count both the Flemish master Anthony VanDyck (1599-1641) and his contemporary, the Spanish master Diego Velazquez (1599-1660), as two of those who truly succeeded in depicting the human eyes as “…the windows of the soul” as says the old English proverb. Both of these great artists painted rather expressive faces – countenances – with equally expressive eyes. The masterful artistry of VanDyck and Velazquez is illustrated by the examples below: 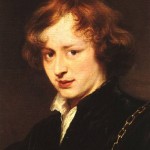 Detail of the eyes, from self-portrait by Anthony VanDyck

Detail of the eyes, from the portrait of Cornelis van der Geest by Anthony VanDyck 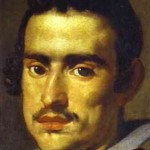 Self-portrait as a young man by Diego Velazquez

More than 3-1/2 centuries after Velazquez and VanDyck we again find and artist painting eyes that evoke the words of that master of the sonnet, Spanish great Gustavo Adolfo Becquer (1836-1870) that once wrote “The soul that can speak through the eyes can also kiss with a gaze”, or the equally descriptive words of Englishman Alfred Tennyson (1809-1892): “Her eyes are houses of silent prayer” . This artist who paints such eyes that let us peer into the very souls of the subjects in her painting, is our own featured master Dulce Beatriz.

To illustrate what I have said about the masterful manner in which Dulce Beatriz depicts the eyes of the old men and women, always painted from live subjects, who are among her favorite subjects, please take a look at the examples that follow:

Detail: The Eyes, from “Mujer de Rojo by Dulce Beatriz 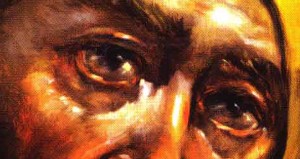 Detail – The Eyes, from painting “El Pastor” by Dulce Beatriz 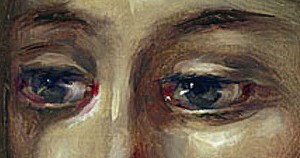 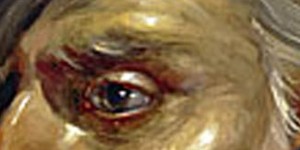 Detail – The Eyes, from painting “El Anticuario” by Dulce Beatriz

It is all in the eyes, the Eyes of Dulce Beatriz. For more “eyes” please visit GALLERY in this site, and then select :Gallery 1: Old Men or Gallery 2: Women and Children.